30 June 2016. Kevin Li, Chief Investigator for the ARC ITTC for LNG Futures has been awarded a Global Connections award by the Australian Academy of Technology and Engineering (ATSE). The award of $7,000 is to enable further collaboration with DKT Consulting in China to further develop a new family of methane adsorbents namely ionic liquidic zeolites (ILZ) developed by Kevin Li and Professor Eric May’s team at UWA. Currently, the UWA team has been awarded the PCT patent for the invention of these ILZ adsorbents.

The novel ILZ adsorbents developed at UWA outperform all known industrial adsorbents in their ability to separate methane from nitrogen. They can potentially be applied to recovering methane from nitrogen vents in an LNG plant and from other low grand methane such as coal bed methane and biogas. This would have benefits of increasing plant efficiency and reducing methane emissions to the atmosphere. 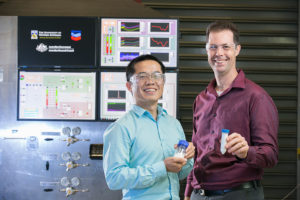 Kevin Li & Eric May in the Separations Laboratory

The ARC ITTC for LNG Futures is an Australian Research Council Industrial Transformation Training Centre based at UWA.  The Training Centre is funded for five years with $5 million from the Australian Research Council and $4 million from nine major oil and gas companies. Research partners include the CSIRO, Curtin University and the Universities of Queensland, Adelaide and Melbourne.

Kevin is a Chief Investigator for the Training Centre and also leads the Separations research group in the Fluid Science and Resources Division in the UWA School of Engineering, Computing and Mathematics. In 2015 Kevin was awarded the Woodside Oil and Gas Encouragement Award and Perth Convention Bureau Travel Award at the WA Innovator of the Year Awards. His research is in the area of novel technologies for gas separation, in particular carbon capture and methane recovery in energy sector.