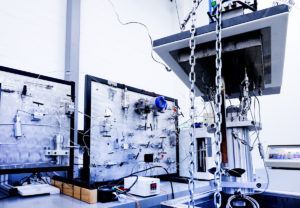 University in Leeds and attended two conferences in the UK and Italy presenting aspects of his NMR (Nuclear Magnetic Resonance) research.

At the conference MRPM13 (Magnetic Resonance in Porous Media) in Bologna, Italy Mike presented his work on the Earth’s Field Multiphase Flow Meter currently under development at UWA. The conference aims to further progress the field of Magnetic Resonance in Porous Media and facilitates networks and collaboration between Academia and Industry.  The conference spanned a broad range of porous media applicable to a wide range of industries including the oil and gas, food, wood and pharmaceutical industries.

At Imperial College Mike gave a Plenary Talk on Enhanced Gas Recovery at a two-day EPSRC-sponsored Workshop on Reactive Transport in Porous Media. He joined other Plenary speakers including Professor Scott Fogler (University of Michigan) who gave a talk titled “From acid stimulation of porous media to asphaltene stability and precipitation and Herbert Huppert (University of Cambridge) who presented his work on “Flows in porous media: theories, experiments and applications”.

The Engineering and Physical Science Research Council (EPSRC) is is the main UK government agency for funding research and training in engineering and the physical sciences. The workshop was hosted jointly by Imperial College London and the University of Cambridge and funded as part of EPSRC grants for “Development of Unified Experimental and Theoretical Approach to Predict Reactive Transport in Subsurface Porous Media”.