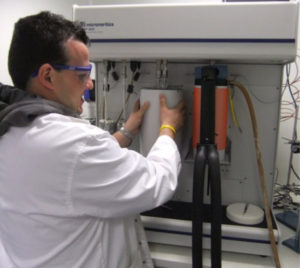 Gas is much “cleaner” than coal as the combustion of gas emits 47% less carbon dioxide for the equivalent energy output, and virtually no sulphur dioxide or mercury pollutants. Methane is the primary component of gas but it is also present with significant quantities of contaminants such as nitrogen, carbon dioxide and other minor impurities, depending on source of the natural gas, which may be conventional (such as associated gas or coal mine gas) or renewable (biogas and landfill gas). These contaminants have to be removed to meet gas quality specifications. The separation of carbon dioxide from gas is conventionally performed by scrubbing with alkaline reagents, such as amines, which is typically energy inefficient and can be environmentally problematic. The rejection of nitrogen from methane is more difficult: in LNG production it is normally performed through cryogenic distillation, which is also energy intensive. This process produces a nitrogen stream that is vented to the atmosphere which can contain about 2% methane. Given methane is a greenhouse gas 21 times more potent than carbon dioxide and also represents a waste of valuable fuel, such methane emissions are clearly undesirable. 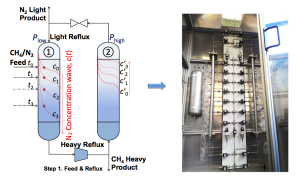 Our major objectives are to develop adsorption based technologies that can be applied in different stages of the gas production process: separating carbon dioxide and nitrogen from gases for methane purification, and capturing the latent methane and reducing its concentration in the vent streams to the part-per-million level. This involves the interplay of adsorption fundamentals, material science and chemical engineering, so developments of both high performance adsorption materials and processes are equally important.

The role of water on postcombustion CO2 capture by vacuum swing adsorption: Bed layering and purge to feed ratio

Using one waste to tackle another: Preparation of a CO2 capture material zeolite X from laterite residue and bauxite

The removal of CO2 and N2 from natural gas: A review of conventional and emerging process technologies