The Fluid Science and Resources Laboratory applies NMR techniques to the study of water management over a range of applied projects: 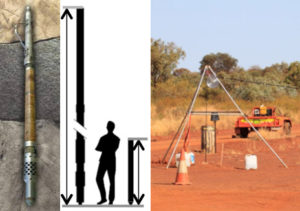 (i) The moisture content of iron ore deposits is a critical parameter for their subsequent extraction and processing. There is extensive industrial interest in the mining industry in the use of NMR logging tools for the in situ determination of this moisture content in exploration wells (of which in excess of 40,000 are drilled in Western Australia annually) before mining has commenced. We are currently developing laboratory-based measurement techniques and analysis tools, which are essential for the calibration and interpretation of NMR logging data. This techniques developed are also being applied to glauconite-containing greensands as are frequently encountered during gas and oil NMR logging in Western Australia.

(ii) Desalination of seawater to provide potable water is a rapidly expanding activity in Western Australia (providing 50% of potable water) and across the world. Increasingly this is done using reverse osmosis membranes in the form of spiral-wound modules (ROMs). These are, however, susceptible to bio-fouling by a range of organisms that can cause serious performance degradation and complete failure of the ROMs within one year. We have developed cheap, mobile NMR instruments employing the Earth’s magnetic field to provide an early warning of bio-fouling, such that corrective actions can be initiated.

(iii) Natural gas production is typically accompanied by significant quantities of produced water that must be efficiently separated from the gas and discharged back to sea. We are currently developing technology to monitor the hydrocarbon contamination of this discharge water such that it is compliant with environmental legislation. Ultimately, this technology will be implemented sub-sea, requiring remote or autonomous operation. At the heart of the system is a small bench-top NMR spectrometer, which is able to resolve crude-oil from water and solvent, allowing a direct and in-line quantification of hydrocarbon contamination.

Colloids and Surfaces A: Physicochemical and Engineering Aspects 2014, p244 - 251

The effect of biofilm permeability on bio‐clogging of porous media