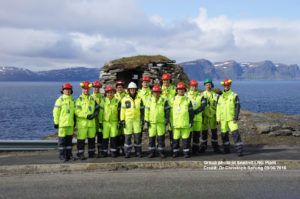 5 July 2016.  Dr. Kevin Li recently braved the cold at the world’s most northern LNG Facility in Norway. The tour of Snohvit LNG Plant was a field trip arranged as part of Natural Gas Conversion Symposium in Tromso, Norway (NGCS11).  Warm Hi-Vis clothing was provided as part of the tour and although currently summer in the northern hemisphere daytime temperatures only reach 10°C.

On the tour Kevin comments “This has been a rare chance for a researcher to closely experience a real LNG facility. What makes this visit even more impressive is the magnificence and complexity of the largest human engineering structure inside the northern polar circle.”.

Commissioned in 2007 the Snohvit plant is part-owned and operated by Statoil. The annual export capacity is 4.3 million tonnes of LNG per year.  In an Australian context the plant is about the same size as Woodside’s Pluto LNG Plant near Karratha in Western Australia.

Kevin also notes that the visit will have benefits for the ARC LNG Futures Training Centre “The novel technologies used by Snohvit LNG for example the spiral wound heat exchanger for the cold box and the bacteria assisted water treatment for the discharge of waste amines will significantly foster my knowledge in future research and teaching in our LNG Centre.”

Kevin was also impressed by the quality of NGCS11. The conference brought together top scientists and young scholars from all over the world, nearly 400 in total.  Kevin who had travelled the furthest of any of the delegates presented two posters as part of the conference one on Ionic Liquidic Zeolites and the other on Zeolite Catalysts for Methanol to Gasoline Conversion.

The ARC ITTC for LNG Futures is an Australian Research Council Industrial Transformation Training Centre based at UWA.  The Training Centre is funded for five years with $5 million from the Australian Research Council and $4 million from nine major oil and gas companies. Research partners include the CSIRO, Curtin University and the Universities of Queensland, Adelaide and Melbourne.

Kevin is a Chief Investigator for the Training Centre and also leads the Separations research group in the Fluid Science and Resources Division in the UWA School of Engineering, Computing and Mathematics. In 2015 Kevin was awarded the Woodside Oil and Gas Encouragement Award and Perth Convention Bureau Travel Award at the WA Innovator of the Year Awards.  His research is in the area of novel technologies for gas separation, in particular carbon capture and methane recovery in energy sector.